The Night of the Hunter (film) 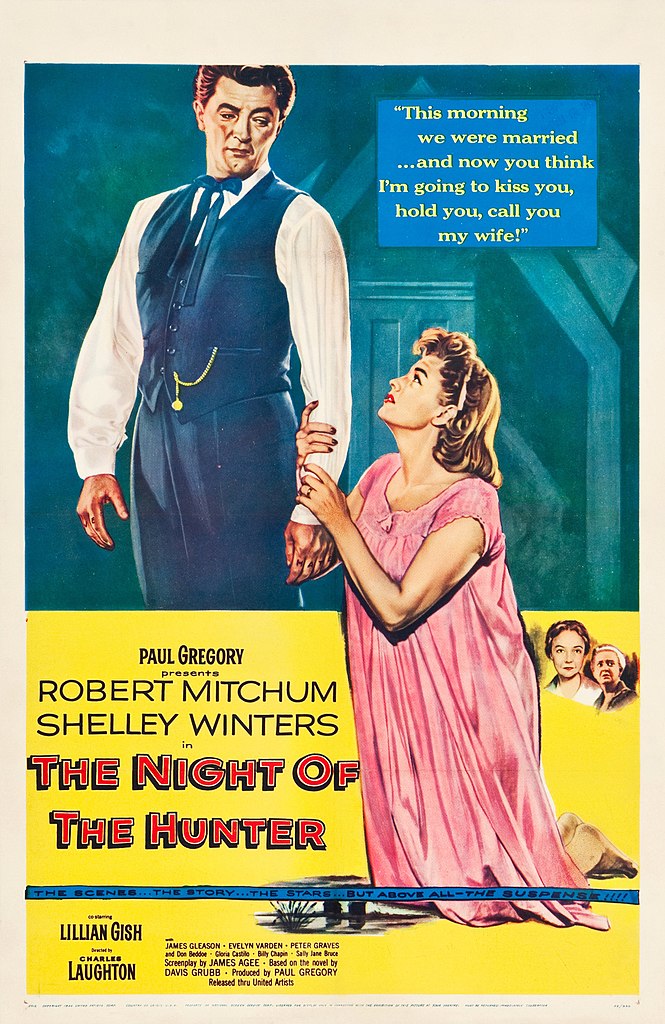 The Night of the Hunter is a 1955 American thriller film directed by Charles Laughton and starring Robert Mitchum, Shelley Winters, and Lillian Gish. The screenplay by James Agee was based on the 1953 novel of the same title by Davis Grubb. The plot focuses on a corrupt minister-turned-serial killer who attempts to charm an unsuspecting widow and steal $10,000 hidden by her executed husband.

The novel and film draw on the true story of Harry Powers, who was hanged in 1932 for the murder of two widows and three children in Clarksburg, West Virginia. The film’s lyrical and expressionistic style with its leaning on the silent era sets it apart from other Hollywood films of the 1940s and 1950s, and it has influenced later directors such as Rainer Werner Fassbinder[1] and Robert Altman.[2]

Selected for preservation in the United States National Film Registry in 1992, it is now considered one of the greatest films of all time.[3][4] The influential film magazine Cahiers du cinéma selected The Night of the Hunter in 2008 as the second-best film of all time, behind Citizen Kane.[5]

In West Virginia in the 1930s, Reverend Harry Powell is a self-appointed preacher and misogynistic serial killer who travels along the Ohio River, justifying the women he murdered with his switchblade knife after marrying them for their money as doing God’s work. After reaching a town sometime after his latest murder, Powell ends up being arrested for driving a stolen car and serves his sentence at Moundsville Penitentiary. By chance, Powell ends up sharing the same cell as Ben Harper, a local man who murdered two men in a bank robbery for ten thousand dollars. But with the police about to catch him, Harper makes his children John and Pearl promise to never reveal where the money is hidden after hiding it in Pearl’s doll. Despite Powell’s attempts to learn the money’s location, Harper takes it to his grave.

Following Harper’s execution, the released Powell makes his way to Harper’s hometown where he charms the townsfolk while wooing Harper’s widow Willa, who has been working for Walter Spoon and his wife Icey.[6] Powell eventually marries Willa. Powell manages to win the town’s trust, and only John is distrustful of him. John accidentally reveals that he knows the money’s location when Powell overhears him reminding Pearl of their promise. Willa overhears Powell threatening Pearl to reveal the money, but Willa is deluded that Powell married her to redeem her soul.

Powell murders Willa soon after, dumping her body in the river while making it appear that she left him and the children for a life of sin. Powell then proceeds to threaten John and Pearl before learning the money is hidden inside Pearl’s doll. The children escape him and attempt to seek refuge with Birdie Steptoe, an elderly man who spends his days drinking on his riverboat and is friendly with John. When they arrive, they find that Birdie has drunk himself into a stupor after discovering Willa’s corpse, fearing that the town would blame him for her death. The children use their father’s boat to flee down the river and eventually take sanctuary with Rachel Cooper, a tough old woman who looks after stray children.

Powell tracks them down, but Rachel sees through his deceptions and runs him off her property with Powell threatening to come back after dark. During the all-night standoff, Rachel shoots and wounds Powell as she traps him in her barn before calling the police. The police, by now having discovered Willa’s body, arrive to arrest Powell. John breaks down as he witnesses the arrest of Powell as a parallel to his father’s arrest, beating the doll against the handcuffed Powell as the money spills out. Following Powell’s sentencing at Moundsville, with John as a witness, Rachel takes him and the other children away as a bereaved Icey leads a lynch mob to take Powell from the police station. The police take Powell to safety, but the professional executioner promises to see Powell again soon. Finally, John and Pearl have their first Christmas together with Rachel and their new family.