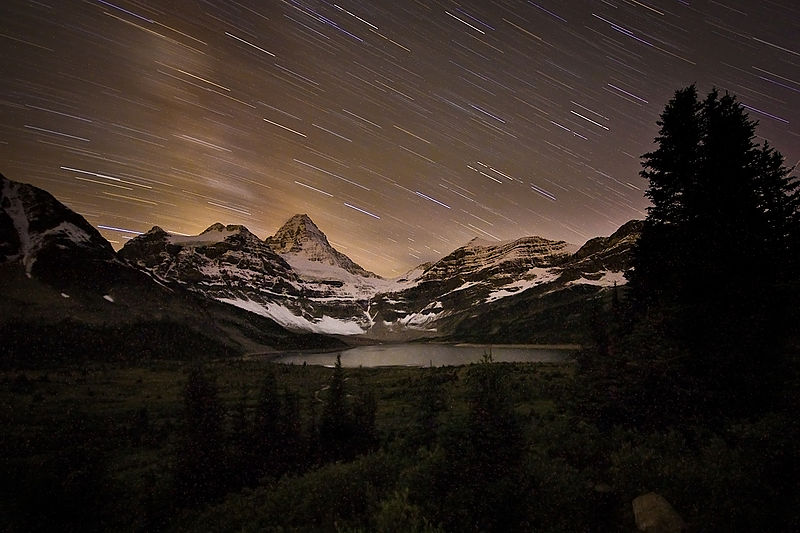 This is one of a group of Canadian Rocky Mountain parks that are collectively on the UNESCO World Heritage List.

Mount Assiniboine Provincial Park covers 39,013 hectares – a bit bigger than the Isle of Wight. It is a place of lakes, glaciers, mountain peaks and alpine meadows. Mount Assiniboine, at an elevation of 3,618 metres, is on the continental divide near the southeast corner of the park.

No roads penetrate this unspoiled wilderness, with trails providing the only land access. Camping, hiking, mountain climbing and viewing spectacular mountain scenery are the main activities here, as well as fishing, horseback riding, and ski touring in winter.

This area was well known to the indigenous peoples of the foothill and mountain country. Occasionally interrupted by wars, there was much trading between the tribes from the different sides of the Rockies. The Peigans, the Assiniboines, the Blackfoot and the Kootenai travelled the routes over many mountain passes through the Rockies.

G.M. Dawson, of the Geological Survey of Canada, named Mt. Assiniboine in honour of the Assiniboine people when he visited the area during the summer of 1899. Assiniboine means “stone boiler” a name that comes from the Aboriginal practice of putting hot rocks into animal paunches or holes filled with water in order to cook food.

Upon the urging of the Alpine Club of Canada, British Columbia set aside 5,120 hectares of the area on February 6, 1922 as Mount Assiniboine Provincial Park, the seventh in a fledgling park system. In 1973, the park area was increased sevenfold to its present size of 39,050 hectares

Mt. Assiniboine is the seventh tallest mountain in the Canadian Rockies and its massive covers 80 km².

Boreal forests of spruce, intermixed with stands of alpine fir and lodgepole pine, cover the lower elevations. In more open areas, scattered patches of false azalea, buffalo berries, twin berries, white rhododendrons and, occasionally, red elder may be found. Between the elevations of 2,100 and 2,400 metres, open stands of alpine larch occur alongside alpine fir and Engelmann spruce, with a ground cover of red and white heather and grouse berries. Dense thickets of various species of low-growing willows associated with bog birch can be found along mountain streams and in boggy areas.

There are no fees for day use. Anyone fishing or angling in British Columbia must have an appropriate licence.

This article is issued from web site Wikivoyage. The original article may be a bit shortened or modified. Some links may have been modified. The text is licensed under “Creative Commons – Attribution – Sharealike” [1] and some of the text can also be licensed under the terms of the “GNU Free Documentation License” [2]. Additional terms may apply for the media files. By using this site, you agree to our Legal pages . Web links: [1] [2]