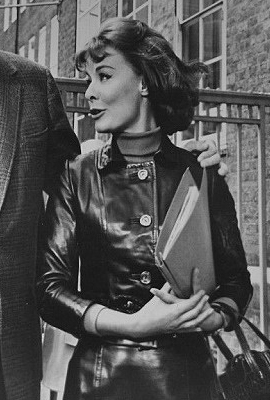 Anne Heywood (born 11 December 1931) is a British film actress, who is best known for her performance in The Fox.[1]

Born as Violet Joan Pretty[2] in Handsworth, Birmingham, she won the Miss Great Britain title under her real name in 1950.

In 1947 she joined Highbury Little Theatre in Sutton Coldfield and then won a Birmingham University Carnival Queen competition. She then entered a National Bathing Beauty Contest and won. She had a small role in Lady Godiva Rides Again (1951).[3]

She made three TV appearances on the Carroll Levis TV Show and then spent four years touring UK theatres. Later she also attended the London Academy of Music and Dramatic Art. She had a small part in Find the Lady (1956).[4]

Heywood was signed to the Rank Organisation who changed her name to “Anne Heywood”. They put her in small roles in Checkpoint (1956) and Doctor at Large (1957). The Danziger Brothers borrowed her for the lead in The Depraved (1957).

Rank gave Heywood the second female lead in Dangerous Exile (1957) and she was the female lead in Violent Playground (1958) with Stanley Baker, which established her as a film name.[5] She did Floods of Fear (1958) with Howard Keel.

Herbert Wilcox used her as Frankie Vaughan‘s leading lady in The Heart of a Man (1959), then for Rank she starred in a comedy Upstairs and Downstairs (1959). She was loaned to an Italian company to make Carthage in Flames (1960).