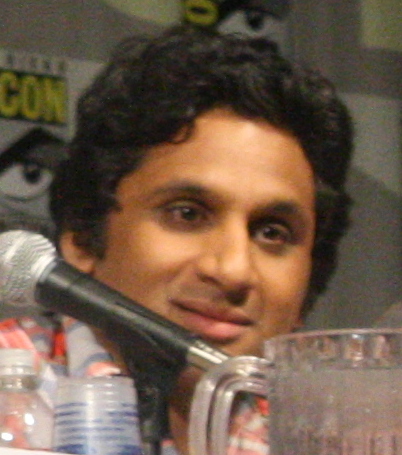 Ravi Vasant Patel (born December 18, 1978) is an American actor. He has also written and directed, with his sister, an autobiographical documentary, Meet the Patels.[1]

Patel was born in Freeport, Illinois, the son of financial consultant father Vasant Patel and real estate agent mother Champa Patel. He spent most of his youth in Charlotte, North Carolina. He graduated from the University of North Carolina at Chapel Hill in 2001 with double majors in Economics and International Studies. His sister, Geeta Patel, is a writer and director.[2] An investment banker after college, Patel co-founded poker magazine All In while living in LA.

An emcee job, with improvised stand-up in between acts, led to auditions, his first agent, and two dozen commercials in a year. Patel has been in over 70 national commercials, films and TV shows, most notably Transformers, Scrubs, It’s Always Sunny in Philadelphia, The Comedians, and Hawaii Five-O.

Patel co-directed and starred in Meet the Patels, a documentary that he made with his sister, Geeta Patel, that won the audience award at the 2014 Los Angeles Film Festival.[4] The film portrays Patel’s autobiographical[5] journey of trying to find an Indian wife.[6][7][8] The duo have a deal with Fox Searchlight Pictures to write and direct a narrative remake of the film.[9][10]

Patel worked in multiple episodes of the Aziz Ansari series Master of None.[10] From 2015 to 2016, Patel was on the John Stamos TV series Grandfathered.[7]

In 2020, Patel also created the CNN-produced docuseries Pursuit of Happiness, which aired on HBO Max.[11]